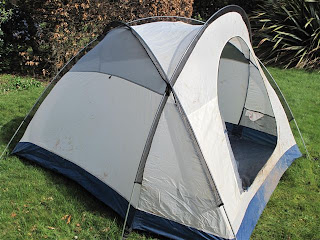 On my bookshelves is a copy of "The Camper's & Tramper's Week-End Book" by Showell Styles, first published way back in 1956. One of the snippets of advice runs, "It is usually inadvisable to buy a second-hand tent unless you know the previous owner and his habits well."
Good job I ignored the advice last year with a bid on ebay for three tents. My winning 99p offer was a reflection of the state they were in when unpacked. Filthy and torn, they looked a mess as they tumbled out of the unwieldy package. It took a little while to sort them out and identify them. All three were more or less complete but with quite a variety of rips, scrapes and general damage. A good project, in other words, for odd hours. Or so I first thought. The temptation was too great and no time was lost getting to grips with the reconstruction.
Identification of the Halfords Challenger 2 was easy. As a single skin "festival" tent, it made a great play tent for friends' children when a couple of rips were repaired. The Eurohike flysheet and inner were so badly damaged that the various elements of the tent were taken apart for spares, patches and because "they might be useful"; they joined all the other potentially useful stuff in the depths of the garage.
The third proved to be a Gelert Summit in fair condition overall. A holey groundsheet, faded flysheet and zips jammed solid with dried mud were the only obvious problems on a well-hammered tent. The first two are common problems with all modern tents, in my experience. It's more than irritating to have a useless groundsheet in an otherwise perfectly sound tent. Unless, of course, you stop thinking of the sewn-in fabric as a groundsheet as regard it merely as a means of keeping out draughts and insects. Then, "optional" tent footprints become an essential part of a purchase and need to be built into budgets. Then, concerns about porous groundsheets, snagged, torn and leaking, become irrelevant.
A friend took one look at the mud-covered mound of fabric and noted that only an idiot would do anything other than bin the lot. As a fully paid up member of Buffoons R Us, I bent to the task. Shaking fly and inner vigorously disposed of plenty of mud dust. Both went separately, along with stuff sack, pole and peg bags, into the washing machine with that miracle worker Nikwax Tech Wash. They came up well with zips running freely and fabric clean again. On a sunny afternoon, both were dry within the hour. A few stitches on the inner tent dealt with small tears.
The groundsheet was full of tiny holes as well as scrapes and tears but recycling the heavier weight groundsheet from the Eurohike tent should deal with that problem. A little glue and duct tape sorted the two split fibreglass poles and pegs were soon straightened, replaced and added to for a full set. Guylines were unravelled, old knots untied and new Line-Lok sliders fitted.
It certainly looks like its seen hard times but is still waterproof and will see good service through the summer and beyond. On delivery, it was a testament to how not to look after a tent but it only took a couple of hours to restore it.
Not bad for 33p.
Posted by John Traynor